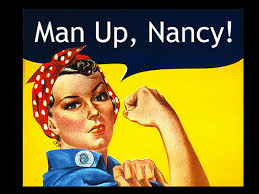 “Get some balls”.  I here this all the time.  I’m not male bashing, just once again trying to wrap my mind around this “new age” man.  I’ve sometimes heard this combined with the phrase, “stop acting like a girl”. Hmm…really gotta let that sink in.  I just don’t understand how “balls” represent  the epitome of, power and strength.

You see the other day; my older daughter kicked her cousin in the “balls”. He rolled all over the kitchen floor and I believe there were tears.  Over my years on this earth, I have seen men take one to the “balls”.  Sometimes they’ve been “grazed” and once I threw a dirty diaper at my ex and it hit his “balls” and he dropped like he got shot. Why embrace a phrase about a piece of anatomy that can bring grown men to tears with a simple grazing?

Somehow, “acting like a girl” represents weakness.  Now if I applied the same rule to women’s anatomy, it would make more sense.   You can stretch her “anatomy” ten times its normal size, have it rip to the point it requires stitches, push out a human being, and in my case, I had no anesthesia, so I was up a half hour after giving birth and taking a shower.  An hour after bringing my daughter into this world I was holding her and accepting visitors.

Again, I’m trying to get a hold of the changing gender roles in society.  As painful as childbirth was and having to work throughout my entire pregnancy, with my first daughter I was only paid 60% of my pay and my second only for two weeks at 100%.  But for both, I had to use all of my “sick” time first. Hmm…my child’s birth was considered a “sickness”. Men at my job used their sick time for a cold and stomachaches and they had balls!

What many companies now offer to their non-pregnant male employees is FMLA when their child is born (I know there are other uses). They receive the same amount of time as women in the company who actually give birth.  Odd to me.   I guess the more sickening part, I know of two men who actually took the full amount of time offered.  Same rule applied, where they had to use their “sick time” first.  I had stiches (okay a stitch) in my cooch and was hospitalized, with a kid sucking on my tit every two to four hours for the next twelve weeks.

Again, I get the world is changing.  I get men are staying home and the women are working.  But I don’t comprehend men taking FMLA and “sick time” for the birth of their child.  Maybe taking a week or two to help out, but what happens when he is the stay-at-home dad?  I’ve yet to meet a couple who has a kid on the way or a newborn, who don’t need to work anymore.  Again, not my business if it works for the couple, but one day that couple may include one of my daughters.

I’m trying to empower them to “get some balls” (such a weak statement), so they will be able to be successful women, wives, mothers, and professionals one day.  So I guess to be a responsible mother, I need to evolve and embrace the “new age” man.  If I need to instill strength and power within them, is it now, “get a vagina” and “stop acting like a boy”?